We decided to visit more of the northern area of the Twin Cities. This time it was the area near Shoreview, MN. It seems that Shoreview is very much a suburban town. There are a few small lakes and a community center. We were going to head to a specific cafe to have lunch, but sadly we were a bit late. We decided to go ahead and find out what was in the area.

We saw a place called Taste of Scandinavia Bakery & Cafe. It was a nice place in North Oaks, MN just near Shoreview. When we arrived, we weren’t sure, as it was at the end of a rather plain strip mall. However, it reminded me of an old Panera Bread inside. C tried a donut sample that was at the entrance. He said it was nice. We decided that we would have a couple of specials. We had the Lefsedilla (Lefse wrapped around chicken, onions, cilantro/coriander leaves, taco seasonings, with asiago and cheddar cheeses on top, and sour cream and pico de gallo on the side) and the Pulla Breakfast Combo (eggs, two slices of pulla bread french toast/eggy bread, with homemade whipped cream, lingonberries, baked apple slices, and syrup covering the toast, Canadian bacon and a slice of orange as a finishing touch). Though they also sell cakes, loaves of bread and pastries to go. C practically drooled at the idea of having a dessert and purchasing an extra loaf of bread along with our lovely lunch. I wonder if his view of the baked good counter made a difference as my view was the photo gallery wall of nature. The photos were really good and professional. When the three of us left the restaurant, we saw that it is primarily a bus your own table type of place. The staff were very friendly as well and were cool with Baby Willow and the infant/toddler on the other side of the restaurant. 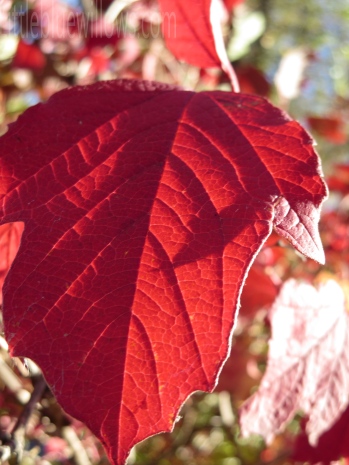 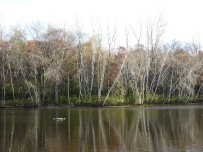 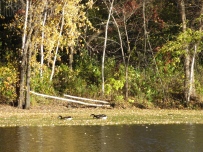 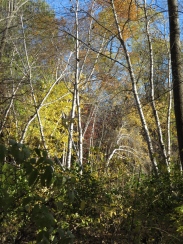 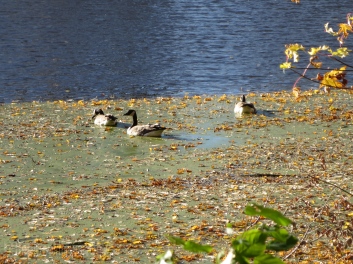 Then we drove to the community center of Shoreview. We saw that they had a small lake without a name near by. It was a good opportunity to see how well the baby handles being around lakes. We took some photos of the last remainder of the colorful leaves. There was a wedding occurring and a bit of buzz about the place. The interior of the building was well cared for and the restrooms/toilets were clean. (Not a small issue.) The building had an interior water park, a massive well equipped gym, reception rooms. I will note that to use these three facilities does cost as it is not a free for everyone type of place. We also discovered that it is a Green Step community that became established in 1957. A fairly new suburb for the Twin Cities. We walked around the lake and the grounds of the community center. The grounds had a play ground, the wooded little lake, soccer pitch, baseball field, tennis courts, and the like. There was a nice pavilion for family reunions and community gatherings. You could tell that this was the main community park for the town. Though the other lakes in Shoreview had some trails, but many were surrounded by private homes.

After a quick walk and a small grocery shop at  Fresh and Natural Foods (a grocery store that feels similar to the Coops in Minneapolis), we went to the Razs Coffee and Ice Cream Cafe. It was a quiet place. There were recommendations for their coffee, but C and I don’t drink coffee. We enjoyed their large portioned affordably priced double scoop ice cream. We both agreed that we were glad we did not try to eat lunch here as the meal type offerings were very limited. The ice cream on the other hand was good. I had too much chocolate for my taste, but decided on Cookies and Cream and Elephant Tracks, whereas C chose Strawberry and Mackinac Island (Pronounced more like “Mack-n-awe” for those from outside of the US.) Fudge. C did take a large bite of my Cookies and Cream. Baby Willow watched us eat the ice cream and we played “hello” with them.

After we had the ice cream, we discovered an unusual feature to this strip mall. It had a small hallway inside. So during the winter you could go to the German sports bar and grill, the popular pizza parlor or even the dance studio without leaving the building. This is highly unusual as strip malls tend to be exterior entry only. I was too small to be considered a mall in the typical way. Though it seems they all used the same restrooms/toilets.

All in all a lovely afternoon. C and I agreed that we’d like to come back and try a few different places in the near future.