This morning we enjoyed the Free First Saturdays at the Walker Art Center, a contemporary and modern art museum in Minneapolis. I really wanted to visit as there is a Claes Oldenburg exhibit showing along with a few other exhibits at the moment. We’ve been through the Sculpture Garden several times before as it is free in general to visit. In fact, one of the landmarks of Minneapolis, the Spoon Bridge in the Sculpture Garden, is by Mr. Oldenburg.  So this time, we decided to explore the park across the interstate/motorway, Loring Park.

A simple but very nice park with: horseshoes area, tennis courts, shuffleboard area, a lake, and the like. We did not expect too much and were nicely surprised. Soon, we were greeted by curious squirrels that have clearly been around humans. One ran to us and stopped to observe. Sadly, we were unprepared to take photos in time. By the time we clued in to the squirrels, they played the popular “base, not it” game stance (usually played in the game of chase) using any tree as base. When we weren’t deemed a threat they went back scarfing down acorns and other seeds. 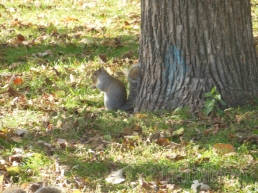 C and I moved on to the cattail lined lake which had an opening revealing a small flock of Mallard Ducks and Canadian Geese. The geese stayed in the back, while the ducks were keen to investigate.

To this C declared, “I think you’ve been spotted.”
I answered, “I know, but I am a good distance away.” 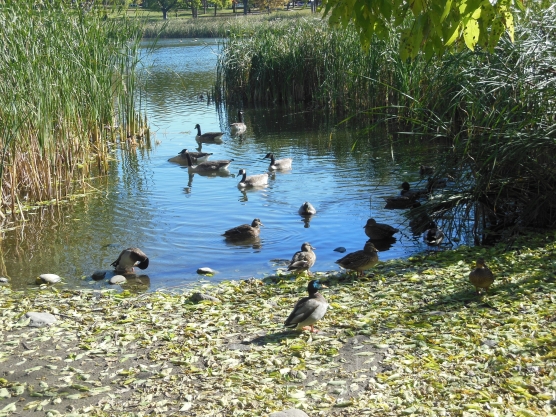 The ducks stayed a solid two yards or even two meters away, but still interacted with each other. A couple of the female mallards were the ones most concerning as they watched me. A male mallard chased one of the female mallards back. Others in the flock stood on the edge of the lake preening and sunning. The emerald green heads of the males glistened in the sun. After a couple of minutes with the birds, we walked around the lake. 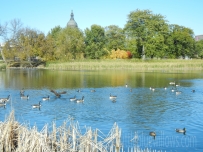 On other side of the lake, we decided to go into the grassy area maybe to explore the neighborhood more. Then we were greeted by a “gang” of curious squirrels. We crouched down with cameras at the ready. The squirrels were clearly used to humans as they ran up to us and stopped about a yard or just shy of a meter away. They stood and quietly staired. It was if we were odd to them and we were being studied. Periodically they made sure to “touch base” and then would return. I wonder if they were fed by other humans.

This lasted a few minutes. It was an unusual experience. I am used to small animals like squirrels, stray dogs and birds being friendly or curious with me, but never like this. It was a highlight of the day for C.

So if you are ever in Loring Park, keep an eye out for curious ducks and squirrels. Some will have earnest faces. Others very much protective.

One thought on “Nosy Ducks and Squirrels of Loring Park”